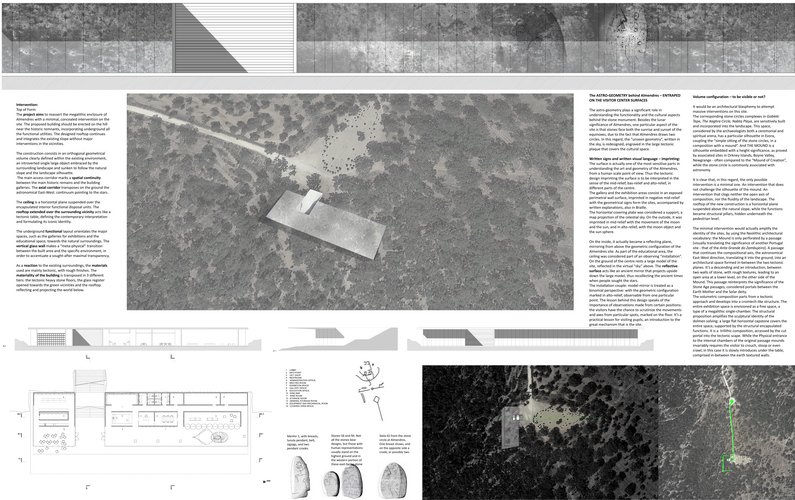 About the concept… The project aims to reassert the megalithic enclosure of Almendres with a minimal, concealed intervention on the site. The proposed building should be erected on the hill near the historic remnants, incorporating underground all the functional utilities. The designed rooftop continues and integrates the existing slope without major interventions in the vicinities. The construction consists in an orthogonal geometrical volume clearly defined within the existing environment, an introverted single large object embraced by the surrounding landscape and sunken to follow the natural slope and the landscape silhouette. The main access corridor marks a spatial continuity between the main historic remains and the building galleries. The axial corridor transposes on the ground the astronomical East-West: continuum pointing to the stars. The ceiling is a horizontal plane suspended over the encapsulated interior functional disposal units. The rooftop extended over the surrounding vicinity acts like a tectonic table, defining the contemporary interpretation and formulating its iconic identity. The underground functional disposal layout orientates the major spaces, such as the galleries for exhibitions and the educational space, towards the natural surroundings. The vertical glass wall makes a “meta-physical” transition between the built area and the specific environment, in order to accentuate a sought-after maximal transparency.